The Healing of Forgiveness

This morning as I was doing my devotional I came upon the story of the women with the issue of blood in Mark 5:25-34 and Luke 8:43-48. Scholars say this woman suffered most likely of a hemorrhage like a menstrual or uterine disorder which according to the law of that time she was unclean pretty much ALL the time and nobody could touch her. 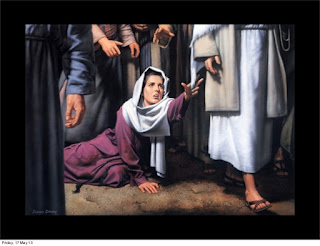 She spent twelve years in that condition and probably like an outcast. But one of the amazing things about this woman was that she does not loose hope. The Bible says she had suffered a great deal from many doctors and over the years and spent all she had in trying to get better. But actually she did not got better, she got worse. I just can't imagine her sadness knowing she could not get married or have children because this illness and knowing no doctor could change her situation. She was probably feeling ashamed because the law considered her unclean even though she did not have control over her situation. She was probably experience a lot of fear because wherever she went her sickness could be expose and then nobody would want to be around an unclean person.

One day she heard about Jesus. You would think after twelve years of not getting better and spending all here resources on doctors with this chronic bleeding she probably have become a very bitter, whiny, and hopeless woman that complain all the time about her chronic illness and situations and resented life. But not that was not her case. As soon as she heard Jesus was coming she had faith that Jesus COULD heal and her shame and fear were not going to stop her from reaching Him in the middle of the crowd. So she said “If I can just touch His robes, I’ll be made well”(Mark 5:28). So she went into the middle of the crowd and she had FAITH that Jesus could heal her. Even thought there had been rejection, disappointment, abandonment, shame, sickness, pain, doubts and fear all her life that did not stop her from reaching out to Jesus.  As soon as she touched Him “immediately her flow of blood ceased and she sensed in her body that she was cured of her affliction”(Mark 5:29).

Then Jesus turned around looking to find who had touched Him and He called her “daughter, your faith has made you well. Go in peace and be free from your affliction”(Mark 5:34). Not only had Jesus healed her physically but He also took away all the loss and pain her illness caused for twelve years. She probably was just looking for healing physically but God knew more than her what she need it. Jesus removed all the pain, sickness, shame, fear, disappointment, rejection, abandonment and made her whole.

Another story that stood out today in the same reading is the blind beggar in Luke 18:35-43. When I
was a little girl in Sunday school this story was taught to me many times and we would see the pictures of the beggar in the ground and in capital letters, to show he was shouting, “Jesus, son of David, have mercy on me”(Luke 18:37). Then the Sunday school teacher would asked us “what did the blind beggar shout?” and we would shout at the top of our lungs “Jesus, Son of David, have mercy on me” it was the best part of the whole story when I was a child.

What is great about this story that also came to mind is that nothing stops this man from shouting as hard as he could for Jesus. Nothing stopped this man from crying out to God for help. He had faith the only person who could restore his sight was Jesus.

The Bible says that people told him to turn around and told him to quiet down. They were probably thinking “the master dose not have to time for a blind man or a beggar like you.” “You are a nobody and Jesus doesn’t have time for you.” That people trying to quiet him down did not intimidate him. Totally the opposite he shouted louder and cried out all the more. 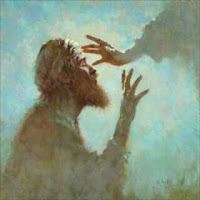 So Jesus again stopped in the midst of the crowd and commanded this man to be brought to Him and he asked “what do you want Me to do for you?”(Luke18:40). Powerful question! He said “Lord, I want to see” and Jesus healed him and returned not only his physical but spiritual sight because he came to Jesus believing in who He was.  Jesus the Son of David.  The Savior. At the end we see all the people glorifying and giving praises to God. And the beggar became a follower of Jesus.
These two stories, and many, many more in the Bible, shows the faithfulness of God. I don't know what you might be going through but it is never too late or too early to cry out to Jesus like the beggar blind or to reach out for Jesus robe like woman with the issue of bleeding. These peoples situations’, pain and sickness were not the end of them but were the main things to strength their faith and glorify God through their healing.

God is not just interested only in our physical healing but also in our spiritual healing. When we answer God’s call we are willing to give up those things that caused to be less than what God calls us to be. God does not just want one little thing about us but our whole self. When we reach out for Him in faith we probably would have one thing in mind but God has many more and greater things for us. He is working in our lives to makes us whole.

"And He [Christ] died for all, that those who live should no longer live for themselves but for Him who died for them and was raised again" (2 Co 5:15).

Who is visiting my blog?